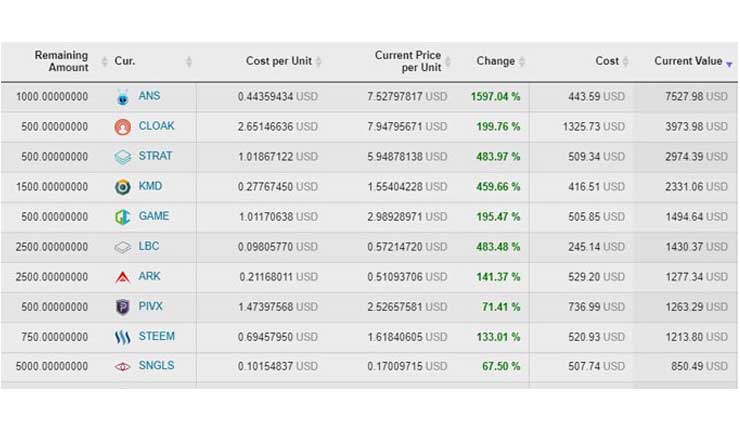 My cryptocurrency profits for the second quarter of 2017 were simply incredible!

The Bitcoin price more than doubled and Ethereum went up 10x before settling around 7-8x. It’s fair to say that it was virtually impossible not to have made a significant return during such a bull market.

Now… we all know that these types of market don’t last forever. With that in mind, I have sold some coin so that I have my original Bitcoin investment back and a very healthy profit on top. My remaining portfolio is worth approximately $270,000 and mostly made up of Bitcoin (BTC), Ethereum (ETH) and Ripple (XRP) which have cost me nothing at all.

In addition, I have been trading cheaper coins on Bittrex. I started around three months ago and in this post I will explain exactly what profit I have made and how I did it.

To be clear… I do not make a single penny from anyone joining or trading on Bittrex. If you want to start trading, use any exchange you like – it makes no difference to me whatsoever.

Ok… so I’m not particularly tech minded and I don’t have time to do a lot of reading. I figured that there are a ton of people already researching cryptocurrency though, so I decided to buy cheap coins which had good trading volume on Bittrex.

That was literally all the research I did.

I spent varying amounts buying coin, sticking to the cheaper end of the market. As soon as each buy was complete, I set up a sell order at double the price for half the coin. Once a sell order was filled, I’d have my original money back and half the coin for free.

Because of the bull market, I really couldn’t miss! This is a list of the free coin I have acquired so far:

Komodo (KMD) were above 1 BTC profit recently, but have dropped back a little lately. Nothing ever goes up in a straight line though, so I’m not worried about some profit-taking:

I didn’t hit a home run with every coin – and I really didn’t expect to. This is a list of the coin I own which hasn’t doubled in price yet:

My total profit so far from this venture is 7.97288794 BTC. That works out at almost $21,000 which isn’t at all bad for hardly any research and three months of doing very little!

I will continue to reinvest Bitcoin back into small coins as prices double and sell orders are filled. Bitcoin itself is taking a breather after recently breaking through the $3,000 barrier and I believe it will soon be back there and well beyond. Once Bitcoin starts moving up again it will drag other coins with it like it has done for the previous three months.

That’s when this strategy really motors!