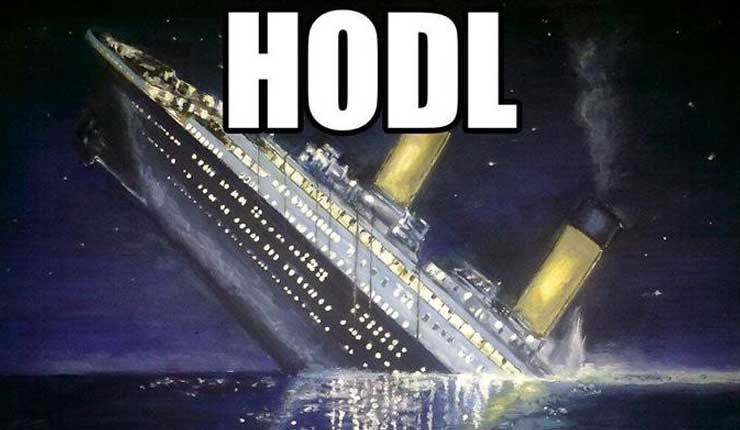 It's been quite a while since my last update. Quite frankly, there's been nothing to write about and I've been happily hodling.

In case you don't know, "hodl" is internet slang which originated on a cryptocurrency forum in 2013. Some people have suggested it means "hold on for dear life", but in fact it was nothing more than a drunken typo which went viral.

Of course, with the benefit of hindsight I'd have sold everything I had and bought back at $3,000, but investing never works like that.

My personal opinion is no, but nobody knows for sure.

Blockchain technology is certainly here to stay, but I don't know whether Bitcoin is going to be around long-term.

These days, progress happens faster than ever before. Just a few years ago, MySpace was hugely popular and I used to Ask Jeeves for search results.

I remember VHS winning the videotape battle with Betamax, then DVD killing VHS off, then Blu-Ray taking over from DVD and now watching Netflix become the next best thing.

Progress is constant and maybe something will replace Bitcoin at the top of the tree.

However... when looking at the Bitcoin price since 2012, it looks fine for the time being.

Here are the annual lows for each year:

Does that look like a doomsday scenario to you?

Quite simply, FOMO happened - fear of missing out.

A whole bunch of amateur investors saw others making significant profits and couldn't wait to pile in. I even saw advertisements for home refinancing so that people could "buy Bitcoin dips". Absolute madness.

No sensible investor on the planet mortgaged their house in order to buy an incredibly speculative commodity, but some amateurs probably did - and learned a harsh lesson.

Simple supply and demand drove the Bitcoin price up to $20,000 and, to be honest, I couldn't sell fast enough.

Having originally bought at $230 it was virtually all profit and I got stung for tax, but there was no other choice.

When you hit a life-changing home run like that, you lock it in. No question.

Maybe. I mean, it happened in 2017 as the price rocketed upwards and a little bit of FOMO could set it all off again.

There's talk of a Bitcoin ETF being approved in the US which would attract institutional money and if the price were to hit $5,000, $6,000, $7,000 the hype would start again.

If not, I'll continue to hodl. It's all profit anyway, so I can sit back and wait patiently.

What About Other Cryptocurrencies?

I hold a number of cryptocurrencies other than Bitcoin and many of them are still in profit.

My preference was to buy quality, so I hold a decent amount of Ethereum and NEO.

However, I also bought some tokens which didn't turn out so well. All part of the game.

The cryptocurrency market in general seems to follow Bitcoin up and down, so a nice bull market will do wonders for it all.

Amazingly, my portfolio is still worth more than 10x my original investment even though I cashed out a huge profit in 2017.

It's all doing fine. Hodl.